Coach Johnathen started off his competitive career playing football until being introduced to tumbling in high school. This led to his participation in multiple All Star teams. Johnathen ended up receiving a scholarship from The University of Central Arkansas with their Large Co-Ed team where he cheered for 3 years (1 large co-ed, 2 small co-ed). During this time, he was hired by NCA to travel around the country coaching athletes of all ages ranging from middle school to elite college level. He finished out his BS degree of Exercise Sciences before moving down to Dallas to attain his Doctorate of Chiropractic at Parker University. Johnathen also had the opportunity to cheer at the University of Louisville on their Large Co-Ed team. After a year of traveling back and forth between Louisville and Dallas, Johnathen decided to stay closer to home and cheer with Navarro College as he pursued his doctorate. Currently, Johnathen is focused on his education while also striving to apply his knowledge & experience of the body to aid his clients in reaching their personal goals. 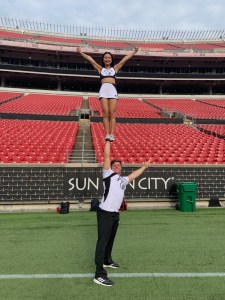